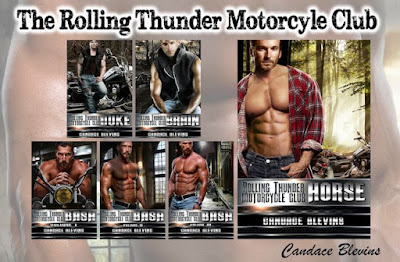 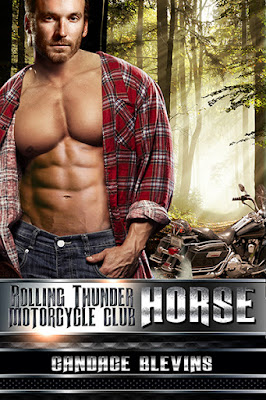 
Horse is one of the first non-wolf shifters to be patched into the RTMC after the rule change. He’s a Grizzly Bear, and his old pawnshop has become the MC’s new gun store in a mutually beneficial arrangement.

Gabby is a rabbit shifter with a complicated history. Rabbits live in Faerie, but her parents chose to escape to the human realm so they could be together. Tragedy struck twice though, and she was taken to The Summerlands at fifteen to be raised by extended family. She’s grown now and has chosen to come back, even though it means she’s alone in this world.

Bears are loners who are used to getting their way. Rabbits are sexual, social creatures who need a wide variety of partners in their lives if they go outside their own species.

And Gabby’s past is on a trajectory to keep her from the future she wants. 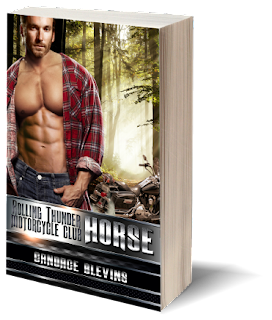 I looked into the gun store from the outside, trying to get up my nerve to go in. I was tired of being afraid all the time, but I was also terrified of owning a gun.

This was the third time I’d come this week, but I just couldn’t bring myself to go in. Sighing, I turned to walk away, and bumped into a heavily muscled wolf-shifter. How had I not smelled or heard him come up behind me? Terror shot through my veins, but instead of running, I froze.

I wanted to apologize for being on the sidewalk, but I couldn’t make my voice work.

“Damn, little one. I’m sorry. I don’t know what I did to startle you, but I promise I won’t hurt you. I’m Ghost, and I’m here to relieve Horse so he can go eat. If someone else has scared you, I’d like to take you inside and make sure you’re okay.” He dropped his voice. “Horse is a bear, which may scare you more, but if you just have a problem with wolves in general, maybe not?”

“Did you want to buy a gun, little bunny? Is someone scaring you? I mean, besides me?”

The door opened and I smelled the bear. “For fuck’s sake, Ghost, I can smell her terror from inside. Pick her up and bring her in, let’s find out what’s scaring her so bad.”

Finally, my body obeyed and I turned to run. Unfortunately, I ran right into the bear, who picked me up and carried me inside. My body was once again frozen in terror as he took me behind the counter, sat me in a chair, and kneeled before me.

Even kneeling, he seemed larger than life.

“Just for a second, pretend we’re both human. I’m not a bear, you aren’t a rabbit. I’m a man who saw a terrified woman, and I want to see what’s scared you so bad.”

His eyes were kind, but he was so damned big I couldn’t tamp down my terror. My inner Rabbit knew the Bear was a predator, and no amount of trying to pretend we were human was going to erase that. He kept his hands and body still, and his voice soft as he said, “You’ve come three times while I was here, looked in the window, and left. Do you want to buy a gun?”

I nodded, and he moved a good two feet farther away from me and knelt again, as if seeing if he could reduce my fear, maybe.

“Have you ever shot a gun?”

I shook my head and he kept his voice gentle as he said, “You get fifteen minutes of instruction and an hour in the range, when you buy a gun from us. I’m not a stickler on the instruction time, though. If you need a little more to be safe with it, I’ll take the time to be sure you’re comfortable handling it. Is there a specific reason you want a gun, little bunny?”

I shook my head and tried to grin. “A Grizzly Bear named Horse?”

He rolled his eyes and grinned back. “Yeah, and a black man named Ghost,” he said as he nodded towards the Wolf. “Why do you need a gun?”

Because I can’t sleep at night. Because every noise makes me think a monster is about to get me. I eventually felt mostly safe in Faerie, but I missed this realm and wanted to come back. Now that I’m here though, old memories keep me up at night. I couldn’t tell him any of that, so I merely said, “It’s personal.”

“Okay. I get that. Are you going to carry it, or leave it at home?”

“I think probably leave it at home most of the time. I get the most scared at night.”

He explained how bigger guns are easier to shoot, but said I’d need something smaller if I wanted to carry it. The wolf got a few guns out of the case and brought them to us, and Horse explained the pros and cons of a half-dozen types of guns before asking my price range. As he spoke, my libido peeked out around my terror and pointed out a bear-shifter would be able to satisfy my needs as no human could. Thankfully, I was able to mostly ignore my libido and pay attention to the conversation.

“I didn’t know it would be this complicated. Maybe I need to go home and do some research.”

“The Ruger I carry would probably be a good choice for you for home defense, and if you planned your outfit you could possibly carry it without it being seen. Would you like to shoot it?”

My terror came back with a vengeance at the idea of going into an enclosed range with the bear, and I leaned forward and put my face in my hands. “Yes, I want to shoot it, but I don’t think I can go into a shooting range with you.”

I felt the two of them looking at each other, and Horse said, “I was about to eat, can I buy you lunch, Gabby?”

Rabbit shifters usually stay in Faerie. I’ve heard of a few visiting this realm, but I’d never heard of one living outside of The Summerlands. I wasn’t sure why this one was here, but something inside me wanted to make her feel safe.

Unfortunately, she seemed terrified of me.

I’d intended to go to the Rolling Thunder Bar and Restaurant for lunch, but I instinctively knew taking her into a room full of wolves would be bad. I also didn’t know if she’d be a vegetarian as a human, or if she’d eat meat, so I needed to come up with a place for lunch with good salads. And, I needed to make it tempting enough, she’d agree to let me buy her lunch.

I’d heard some of the ol’ladies talking about a new farm-to-table organic place, and when I asked if she’d like to eat there, she gave me the biggest doe eyes ever as she nodded her head.

She was a tiny thing, probably not even five feet tall. She was curvy in all the right places, but I doubted she was anywhere near a hundred pounds. I’m six foot five and well over three hundred pounds, but I’ve heard rumors about how rabbits’ bodies adapt to their partners. It’s supposedly one of the reasons they can charge so much as sex workers in Faerie.

“I rode my bike today, little Gabby. Have you ever been on the back of one?”

For the first time, she seemed relieved at something I said. “I have mine, too. We can ride together.”

I nodded, though I wondered why I hadn’t seen her arrive on it. “I’m parked around back, where’s your bike?”

“There’s a park down the street with a bike rack.”

I closed my eyes a second as I tried not to laugh, and opened them to tell her, “I’m on a motorcycle, Gabby. Not a bicycle.”

Her terror came back tenfold, and I sighed. “I have an extra helmet in the back. Let me take you to lunch and I promise I’ll bring you back to your bicycle when we’re done. Or, if you want to look at more guns, we can come back here. Whatever you want.”

“Why do you want to take me to lunch?” 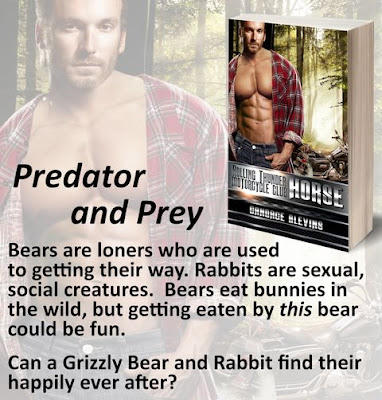 His mouth came down on mine, hot, fierce, greedy. My gentle bear claimed me with his mouth while his hips moved ever-so-slowly and his breath caught on my name as he made love to me.

Damn, he was making love to me.

I’d been trying to make him lose control, but now I slowed my hips and met his rhythm, making love right back. I arched and offered myself to him, absorbed each sensual, slow inch, and shuddered with sensations as I let every one of my shields down and bared my heart to him.

“I’ve loved you since the first day I met you, Gabriella.” I felt his shields come down as well, and I got all of him without an orgasm. His heat and power washed over me, but instead of overpowering me it lifted me up. I was starved for him, and my hands trailed over his body as my hips moved with his and our dance slowly gained momentum — our gazes locked on one other, our souls fused into one.

Pleasure hit us both in a wild detonation of sensations, and reality splintered into colors as if I were awash in a sea of confetti, and gravity didn’t exist. Now my heart felt as if it might explode and I felt his raging as well, our slick bodies thrusting and pounding, too fast and yet not fast enough. My vision dimmed but I could still see my lover’s face, could see his love for me, and I felt every ounce of his pleasure through our shared bond.

Posted by Andrew Hess at 8:46 AM No comments: